So a while back I wrote a post about how I felt great. (It was called, “Unapologetically Me.” It’s here if you want to read it.) 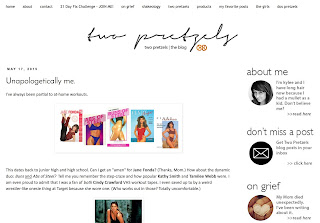 I think that everyone has their own lightbulb moment… there are moments in life when something just clicks.

For me, it was after my Mom died. I was heart broken. I seriously felt as if my heart had been ripped from my chest and was physically broken. The pain was oppressive and intense and heavy. During that time, I started exercising mindlessly because I thought that
if I could heal myself physically – not only would I have some semblance of control over my life, but I hoped that my emotional health would follow.

When I say that I started exercising “mindlessly,” what I mean is that I would put out my sports bra, shorts, socks and shoes at night and in the morning, when my alarm went off – I wouldn’t think, I couldn’t; I’d roll out of bed and grab my clothes and go to my living room where I’d greet Shaun T and the rising sun and we’d get through 25 minutes of T25.


During those workouts I wouldn’t cry.
Those were the only times that I wasn’t physically weighted down by my loss.


I got stronger.
Physically and emotionally.

(Looky here, it’s sort of a real thing: exercise decreases the symptoms of depression and anxiety.)

So I turned to working out.

But, we’re all different, aren’t we?

So I’m married to the cutest man on the planet. We’ve been together for 18 years. He grew up an athlete: soccer, football, track, college soccer – you name it. (Did I grow up an athlete? Um, no.) We moved to Cabo and he would yog, oops, I mean jog, do insane oceanside bootcamps, stand up paddle and row. Still, his regular fitness game hasn’t been “on” for about four years.

[He’s given me permission to write this.]

So I became a coach and I got a bag of strawberry Shakeology. Shakeology is the nutrition-packed, pro-biotic and pre-biotic shake that if you’ve ever done a Beachbody workout, you’ve heard about it. They talk about it all of the time. “Get your daily dose of dense, superfood nutrition.”

I accidentally ordered strawberry, imported it to Cabo, and was so frustrated that I bought the “wrong” flavor, that I didn’t try it for about a month. (Nope. I’m stubborn. WHO WANTS STRAWBERRY?!?! GROSS.)

So, Craig tried it.

Let’s put this in perspective first.

CRAIG DID NOT EAT WELL.
He skipped breakfast and sometimes lunch. He wouldn’t eat until dinner.
He wasn’t dining on twinkies, all day – but he just was not eating what he should eat.

After about 4 weeks, his body thanked him for finally feeding it something… anything… but most notably, superfoods! One shake is full of the equivalent of 5 plates of salad.

He lost four pounds in a couple of weeks without working out. The scale never budges for Craig. It’s annoying. I think for me the scale can fluctuate 2-4 lbs a day.

So, he got my attention.

Craig has lost 11 pounds just by replacing one meal a day with Shakeology. JUST by getting his shakeology in. JUST by drinking his whole foods. Daily.

As a woman, I don’t even understand the various male phenomenon-based weight loss techniques. But, I couldn’t help but be floored by it either.

It has been so, so, so cool to watch.

What Craig needed to see was momentum. He needed to see the scale shift… and it inspired him to make better choices. It’s what we all want. We want some measurable success: sore muscles, a loose pair of pants, a lower number on the scale.

…and then we’re inspired and ready to do more.

DISCLAIMER: I would NEVER tout Shakeology as a “weight loss” drink. It’s not. Please hear me on that, it is not a weight-loss drink. This ain’t no slimfast. Instead, it’s full of good nutrition that, let’s face it, we all just don’t get everyday. No artificial anything. All whole foods.

For Craig, I think he was finally consuming what he needed to be healthy and his body responded.

So, what does Craig’s daily food intake look like?

Morning: 20 oz. of coffee with that terrible CoffeeMate Hazelnut creamer

Noon-1 p.m.: Shakeology – with ice – usually half a banana (Chocolate is his favorite.)

It shocked me, too.

Here’s what he said:

“I can’t change my entire life at once. I needed to change my food decisions, yet still not be barred from consuming what I like to consume. I’m just not that guy who’s going to jump all in, work out seven days a week, eat nothing but vegetables and not drink.”

NO ONE likes to feel deprived.

I hear him loud and clear.

Know what else he said? “After drinking Shakeology for 3 months… I really don’t see myself quitting. I’ve always been a fan of 1.) smoothies and 2.) drinking my calories instead of eating… this works for me.”

Note: I, Kylee, I like to both drink and eat my calories, but I digress…

So, where is he now? He’s down 12 lbs. and he’s starting a nutrition and fitness program for the next 3 weeks to dial it in even further. He’s going to work it out. He’s ready now.

When did this happen to us?

We are “let’s drink some wine and eat half a cake on the couch” kind of people.

Nope. Not any more.

Life’s too short not to feel great.

So for me? The working out came first. That’s the easy part for me.
The nutrition? It took me six years to try Shakeology and I’m still working on getting my nutrition in order.

For Craig? The food came first, the working out second.

We all must do things our own way.

But as long as we’re doing something and we’re staying accountable, it’s all good.

I believe this might be Ferg’s new traveling home

« Put a fork in me.
How to train your hair – Stop washing it everyday. »

Mama got a brand new hat today. There’s a heart

Ok. I couldn’t love this man more. I mean, almo

This was the best $100 pesos I’ve spent in quite

I have watched this at least 10 times. Wait for t

All I wanted when I was a kid was a dog. This is

Dog fostering ain't for the weak of heart. They c

Mama got a brand new hat today. There’s a heart

Ok. I couldn’t love this man more. I mean, almo

This was the best $100 pesos I’ve spent in quite

I have watched this at least 10 times. Wait for t

We use cookies to ensure that we give you the best experience on our website. If you continue to use this site we will assume that you are happy with it.Ok